The company hoping to build a £3 million crematorium at Chatteris has been told they must pay £20,000 to Fenland Council to enhance the district’s cemeteries.

Memoria Crematoria Ltd has had the condition imposed following its successful battle for approval for the crematorium at Fenton Way.

The formal document signed by the company says the £20,000 is a contribution towards “environmental improvements and biodiversity and will be used for the enhancement of all cemeteries with Fenland.”

Jamieson Hodgson, new business manager for Memoria, said the company was “perfectly happy” with the £20,000 payment.

“It is something councils do quite regularly to compensate them,” he said. Councils may expect to lose business once a crematorium is built, especially from the costs of interring ashes in a traditional churchyard.

Mr Hodgson praised local councillors, especially Councillor Florrie Newell, for their support in bringing the crematorium to Chatteris which he described as “the best location for it in Fenland”.

Councillors overturned their officers’ recommendation and agreed for the development to go ahead, even though work has started on another crematorium 10 miles away at March.

He said it was likely both the Chatteris and March sites would co-exist peacefully, drawing custom from different areas.

Mr Hodgson said crematoria were “expensive beasts” to build and his company would not have gone ahead with Chatteris if they did not believe the demand was there.

He hoped that once the formalities of approval were complete, and a section 106 agreement – which includes the £20,000 – was verified, work might start as early as March.

Memoria, the leading crematoria design and management company, has received planning permission to build two new generation crematoria. One is situated in the Vale of Glamorgan, South Wales and the other in Chatteris, Fenland, Cambridgeshire.

Both will hopefully open in the spring of 2011 and will contain all the pioneering facilities that are standard in Memoria’s previously commissioned sites and born out of the company’s collective 70 years of experience in this field. As a result, they will automatically be ranked among the best crematoria in the UK.

As usual, both of these new facilities will be run by director selected and trained staff in order to offer the highest standards of service which is Memoria’s hallmark and upon which its excellent reputation is based.

These new crematoria are numbers six and seven respectively since the company’s incorporation in 2003 and the first since the sale of the previous five in April this year. 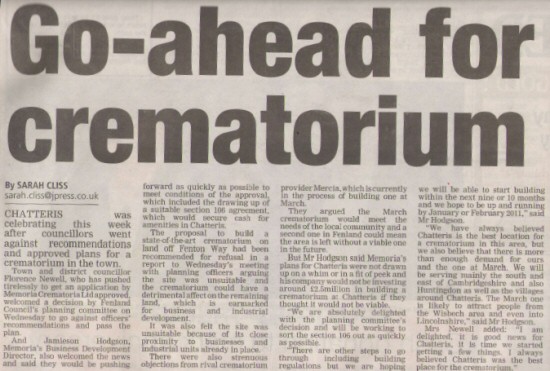 CHATTERIS CREMATORIUM: Thanks for council support, which is long overdue

I READ in great depth of the Crematoria criteria laid out by Nick Owen of Mercia Crematoria, of course he was very pleased of the recommended refusal for the Chatteris Crematorium, by Fenland District Council.

How does he feel now that the Chatteris venture has been passed? He will now need to revise his project figures of 1,200 cremations per year.

Just as Mr Owen lobbied the councillors of March to win their support. I too lobbied my local Chatteris councillors to gain something for my town, where I have lived all my life and served the community nearly 50 years in the funeral profession.

Thank you Chatteris councillors for your support; it is well overdue that we obtain something instead of everything going to March.
TONY LANDIN

In December 2008 Memoria’s landlords sold its five freeholds to Dignity PLC. This forced Memoria to follow suit in April 2009. However, Memoria retained its name and its right to continue to compete as an independent company in the sector.

The result was that Memoria became both cash rich and able to control its future destiny by owning its next generation of freeholds. This was further enhanced when Andrew Sells joined the board in 2009 and, as a successful businessman, was prepared to invest in Memoria’s future. His previous experience gained while being chairman of Westerleigh, a company in the same sector, is also valuable.

Therefore, Memoria is confident of its ability to continue to win preferred party status with local authorities due to its proved track record of building excellent facilities and then operating the same with staff dedicated to the highest possible standards of service as embodied in our mission statement. Consequently, the company expects to submit at least six planning applications in 2010 and is hopeful of having most consented.

Memoria has built more new facilities since the millennium than any other crematoria operator and the directors fully expect this pattern to continue in the coming years ahead.

A new Memoria corporate DVD is available by applying to: