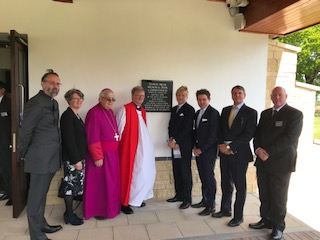 Barnby Moor Memorial Park & Crematorium which will serve communities across Retford, Worksop, Gainsborough and the southern localities of both Doncaster & Rotherham was officially opened and dedicated last Thursday 16th May. To mark the occasion a multi-faith service took place led by the Very Reverend Tony Porter – the Bishop of Sherwood assisted by the Bishop of Hallam, the Very Reverend Ralph Heskett, Rev’d Peter Sheasby from the Retford Methodist circuit and Pippa Pal a local humanist funeral celebrant.

The congregation which included local Funeral Directors, invited guests and clergy was welcomed by company CEO and founder Mr Howard Hogdson. Mr Hodgson who has over 50 years’ experience in the Funeral Industry remarked that although over the last few decades culturally we have witnessed a move away from the rather historical Victorian type services normally associated with funeral providers, citing particularly the advent of more personalisation, direct cremation and the accelerated growth of pre-paid funeral plans – the one constant however that will always remain was the pain and loss we all collectively experience when we face a bereavement.

He went onto say that Memoria as a family owned business, fully recognises this and to this end its mission statement is essentially built around focusing on trying to ease that pain as much as possible. 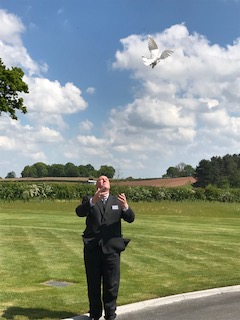 Directly aligned to this aspiration, the site at Barnby Moor includes many industry firsts including the provision of one-hour service times which avoid families seeing other funeral corteges arrive and depart, plasma screens for photo dedications/eulogies, choice of advanced music system or live organ – all set in a beautiful tranquil countryside environment with stunning water features & extensive gardens.

At the conclusion of the official service the congregation progressed out to the chapel entrance area and the Bishop formally blessed the site and its grounds and unveiled a commemorative plaque to record the occasion, this coincided with the symbolic release of a dove by Mr Mark Alexander the site’s Manager.